What is Systemic Consulting? 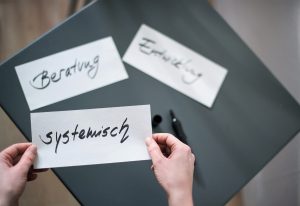 A few years ago, I asked myself the same question and now I ended up working for one. In this article I try to give some short and easy to understand explanations for this approach of dealing with the problems and needs of the clients (who can be individuals and also entire organizations).

The term “systemic” occurred first in family therapy during the 1950s. Like in a mobile (those moving sculptures people hang in their houses), a system consists of several elements with a certain relationship to each other. If one of those elements moves, all the other ones are affected as well. This lead to the belief that a problematic child is never solely the problem, instead it behaves in a certain way as a reaction to its surroundings. Humans are in a constant „systemic“ interplay with each other and you should look at the entire family dynamics, not only at the one person that is supposed to be the „problem“.

Those insights were then carried by some pioneers into the organizational world. It often happens in large companies that individuals are picked as the black sheep and then either forced to drastically change or to leave the company. However, if the overall system or company culture is ineffective, it might be better to broaden the scope from the individual to the collective and analyze the common interplay with each other. Instead of replacing single chairs on the titanic, it might be better to change the overall course of the ship.

You can´t push a human into a certain direction permanently, people have to find sense in their actions themselves, and only then they can decide for themselves whether it is worth the effort to change or to keep the current system. The consultant and client work together on finding workable solutions for the client.

A final question to the reader : Did the most drastic changes in your live happen because someone else told you to or because you decided it for yourself?

Our company con.sentio supports individuals and organisations in the process of changing their actions and strategies for the better. Team developments, management coaching and workshops are our daily bread.

Systemic (business) coaching enables humans to expand their perceptual field or to learn how to see things from a different perspective and to interpret them differently than before.

There is much more to say about systemic consultancy and our goal is to provide you with more insights over the course of the next weeks/months.